Buyer demand continues to be high, but a lack of homes for sale has resulted in a drop of closed sales in April 2014. Prices continue to move up because demand for available homes to buy is outpacing supply. inventory moderate or slightly increasing.

The slower sales pace can be attributed to record todays low inventory level of homes for sale, higher home prices which have reduced housing affordability levels over the past year, and tight credit requirements which are hindering the ability of first-time buyers to enter the housing market. In addition, the harsh, prolonged winter delayed the start of the spring market as buyers postponed their home search and that also dampened sales activity in April.

The current period of prolonged home price appreciation reflects the strong pent-up demand for homes that occurred during the recession of 2008-2011 and the upward pressure being put on home prices as buyers compete for a limited supply of homes for sale. In fact, April marks the fourteenth consecutive month in which the ratio of original listing price to sales price received by sellers has stood at or above 95 percent. Furthermore, the ratio of original list price to sales price has risen steadily since the beginning of the, having climbed from 95.6% in January, to 96% in February, 97% in March and 98% in April.

On a month-to-month basis the median selling price also rose, improving 5 percent from March. The April median price of $525,000 is up 50 percent from March 2009, when home values bottomed out at $350,000 during the recession.

The inventory of homes for sale as expressed in months of supply was stable over the past 12 months, remaining unchanged from last April at 3.6 months of supply. A balanced market occurs when there is 7.5 8.5 months of supply, so at the current sales pace there is an insufficient supply of homes to meet demand, which is likely to frustrate buyers who lose out in competitive, multiple offer situations, and will discourage other buyers from entering the housing market.

As was the case in the detached single-family home market, sales activity improved sharply on a month-to-month basis in April, increasing 25.2 percent from an upwardly revised 644 condos sold in March. Demand for condos remains especially strong among suburban empty-nesters looking to relocate to Boston, as well as with investors, and renters looking to become first-time homeowners.

Similar to the detached home market, the condo market also has been plagued by a lack of listings over the past couple of years and strong buyer demand is fueling much of the rapid run up in prices of late. As a result, sellers are benefitting as the percentage of original list price to selling price increased to 99.7 percent in April, its highest level in nine months dating back to July 2013 when it reached 99.9 percent. Notably, luxury condos in Boston and Cambridge remain in high demand, with sales of high-end units priced at $1 million climbing by nearly one-third (32.7%) over the past 12 months (69 in April 2014 vs. 52 in April 2013), and thats helping to drive up the median selling price as well.

On a month-to-month basis the median selling price for condos did show some moderation however, sliding 3.8 percent from March. The decrease is due largely to a higher concentration of condos sold at entry-level end of the market in April than in March, as condo units priced under $300,000 increased by more than one quarter (26.2%) from March to April (164 in March to 207 in April). Notably, as of last month, the median selling price remains up 55.5 percent from the lowest median selling price reported in the last market correction which occurred in January 2009 when the monthly median price bottomed out at $270,000. 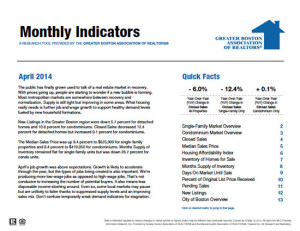