[slideshare id=38327176&doc=2013-boston-by-the-numbers-housingv5-140825083209-phpapp02&type=d] Here's an interesting report from late last year produced by the Boston Redevelopment Authority that details the history and current state of Boston housing stock. It's an interesting summary of Boston's housing market filled with historical data, charts and graphs with metrics for the following subjects:

This report is part of a series created by the Boston Redevelopment Authority's Research Division that highlights the characteristics of Bostons population and economy. See other reports in the series here. 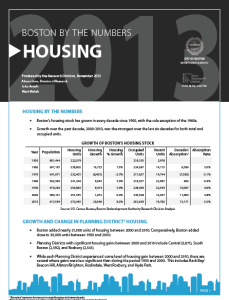