Low interest rates and improving job market continue to keep buyer demand high, but the continued shortage of homes for sale resulted in a drop of closed sales in July 2014. Prices continued to move up because demand for available homes to buy outpaced supply. The number of new listings added to the market in July went up for the third straight month was another positive sign that sellers are starting to enter the market.

Notably, despite the drop in year-over-year sales, last months sales total is the second best ever for the month of July in Greater Boston, surpassed only by the record high of 1,489 single-family homes sold just 12 months earlier in July 2013. A healthy local job market, record high rents, and the steady recovery in home values over the past two years are helping to keep sales strong. Additionally, new household formation is beginning to rise following the Great Recession, and that along with near record low mortgage rates, and a later than normal start to this years spring housing market has allowed buyer activity to remain steady this summer. Thats evident from the fact single-family home sales also rose modestly on a month-to-month basis by 2.7 percent from an upwardly revised 1,417 detached homes sold in June.

The current period of prolonged home price appreciation is a reflection of todays healthy local economy, strong pent-up demand for homes that built up during the recession of 2008-2011 and the upward pressure being put on home prices as buyers compete for a limited supply of homes for sale. In fact, July marks the seventeenth consecutive month in which the ratio of original listing price to sales price received by sellers has stood at or above 95 percent, and with the typical home sold in July selling for 98.6% of its original list price, its just a half percent below the 21st century best ratio of 99.1% set one month earlier in June 2014.

The inventory of homes for sale as expressed in months of supply was stable over the past 12 months at 1.9 months of supply in July. A balanced market occurs when 7.5 8.5 months of supply exists, so at the current sales pace there is an insufficient supply of homes to meet demand, which is likely to frustrate buyers who lose out in competitive, multiple offer situations, and will discourage other buyers from entering the housing market.

As a result, sellers are benefitting. The percentage of original list price to selling price hit 100 percent for a third consecutive month in July, meaning the typical condo owner was able to sell their unit for the full amount of their original asking price. 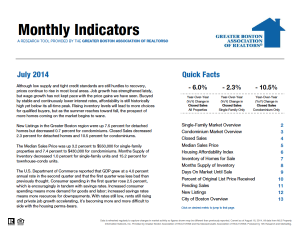