Lowest interest rates of the year continued to keep buyer demand high, but the ongoing shortage of homes for sale resulted in a drop of closed sales in August 2014. Prices continued to move up because demand for available homes to buy outpaced supply. With the end of summer and start of the school year, the number of new listings added to the market ticked down in August. Conditions remain favorable for sellers to enter the market with buyers still very active.

Notably, despite the sharp drop in year-over-year sales, the level of activity is still quite healthy by historical standards. Last months sales total is the sixth best on record for the month of August in Greater Boston, equaling the sales volume from two years in August 2012 when 1,280 homes were sold. A strong labor market, record high rents, and the steady recovery in home values over the past two years are helping to attract home buyers. Additionally, new household formation is on the rise, and with mortgage rates remaining near record lows, housing demand remains solid.

The current period of prolonged home price appreciation is a reflection of todays healthy local economy, strong pent-up demand for homes that built up during the recession of 2008-2011 and the upward pressure being put on home prices as buyers compete for a limited supply of homes for sale. In fact, August marks the eighteenth consecutive month in which the ratio of original listing price to sales price received by sellers has stood at or above 95 percent, and with the typical home sold in August selling for 98.1% of its original list price, its just a one percent below the 21st century best ratio of 99.1% set two months earlier in June 2014.

The more modest price growth may be an indication that buyers are beginning to balk at current pricing levels and the condo market may be nearing its peak in terms of affordability, especially for first-time buyers. Nonetheless, the condo market remains plagued by an insufficient inventory of listings to meet current buyer demand. As a result, sellers are benefitting. In fact, the percentage of original list price to selling price hit 100 percent for a fourth consecutive month in August, meaning the typical condo owner was able to sell their unit for the full amount of their original asking price.

On a month-to-month basis, the median selling price was essentially stable compared to July ($430,000), and thus remains up a nearly 60 percent (59.2%) from the lowest median selling price reported in the last market correction which occurred in January 2009 when the monthly median price bottomed out at $270,000. 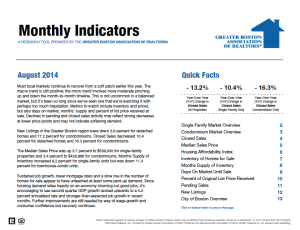