While closed sales were down, low interest rates and moderating prices continued to keep buyer interest high in September. Individual neighborhoods and markets across the state saw improved inventory numbers in September. With fall in full swing, new listings added to the market went up as market conditions remained attractive for sellers.

The market remains plagued by a shortage of listings to meet current housing demand, and this fact along with flat to modest wage growth, still tight credit standards for home financing, and high student debt for many is hindering first-time buyers and others from entering the housing market.

Despite the steady drop in year-over-year sales volume, the level of activity in September was still quite healthy by historic standards. In fact, last months sales total is the ninth best on record for the month of September in Greater Boston. The last time home sales fell for nine consecutive months was December 2007August 2008.

Furthermore, even though the monthly median selling price has declined each of the past three months since reaching a new all-time high of $576,000 in June, the median price for single-family homes rose nearly 3 percent during the 2014 third quarter compared to the same period last year, climbing from $520,000 in the third quarter a year ago to $535,000 in the same three-month period this year. Even more impressive, the September median selling price of $502,500 is still up 43.6 percent from March 2009, when home values bottomed out at $350,000 during the recession.

Its clear both from the data and anecdotal observations from the field that buyers have become a bit more discerning in recent months, exercising more caution in negotiations and not overextending themselves financially to have an offer accepted. Still, September marks the nineteenth consecutive month in which the ratio of original list price to sales price received by sellers has stood at or above 95 percent.

Interestingly, for the summer quarter, the median selling price for condos also appreciated by 5 percent, from $409,375 in the third quarter last year to $430,000 in the three months from July - September 2014.

Like the single-family home market, the condominium market continues to suffer from a lack of listings to meet current buyer demand, especially at the entry-level end of the market. As a result, sellers are profiting. In fact, the percentage of original list price to selling price reached or exceeded 99 percent for a sixth consecutive month in September, meaning the typical condo owner was able to sell their unit either at or just below the full original asking price.

On a month-to-month basis, the median selling price was essentially stable compared to August ($429,931), and thus remains up a nearly 60 percent (59.3%) from the lowest median selling price reported in the last market correction which occurred in January 2009 when the monthly median price bottomed out at $270,000. 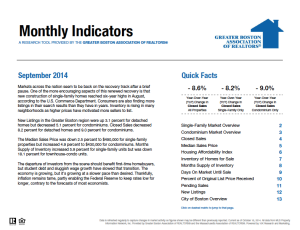