Continued buyer activity and moderating prices pushed closed sales up in October. Inventory of homes for sale continued to go up in individual neighborhoods and markets across the state. Sellers are feeling more confident as new listings added to the market increased for second straight month.

Even though the pace of home sales continues to lag behind year-ago levels, the number of closed transactions this October was still quite strong by historic standards. In fact, last months sales total is the seventh best on record for the month of October in Greater Boston, and the second highest October sales total over the past decade.

While inventory levels have shown some improvement over the past six months, there remains a substantial shortage of listings to meet current housing demand, which is hurting the market since many potential sellers are choosing not to put their home up for sale over concerns they wont be able to find another property to buy in a timely manner. Meanwhile, modest wage growth, still tight credit standards for home financing, and high student debt, are all making it difficult for first-time buyers to save for the down payment necessary to purchase a home.

Significantly, on a month-to-month basis, Octobers median price increased steadily by 2.7 percent from a downwardly revised median price of $488,425 in September. Thats unusual, since buyer demand and market activity typically lessen over the remaining four months of the year.

Demand for condos remains especially strong among suburban empty-nesters looking to relocate to Boston, as well as renters looking to become first-time homeowners.

Like the single-family home market, the condominium market continues to suffer from a lack of listings to meet current buyer demand, especially at the entry-level end of the market. As a result, sellers are profiting. In fact, the percentage of original list price to selling price reached or exceeded 98 percent for a ninth consecutive month in October, meaning the typical condo owner was able to sell their unit either at or just below the full original asking price. 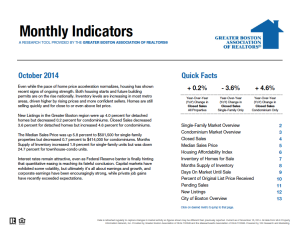