2014 ends on a high note with single-family closed sales up in December. Strong buyer activity, lower inventory and low interest rates pushed prices up again on homes in December. While overall inventory of homes for sale is down in our area, there continue to be pocket markets that are seeing increases. 2014 was a year of lower sales, lower interest rates, lower homes for sale and higher prices.

Sales also rose on a month-to-month basis, increasing sharply by 19.4 percent from an upwardly revised 764 home sales in November. Its the first increase in month-to-month sales activity since sales rose 4 percent in July, and Decembers sales total is the best in four months, dating back to September when 1,288 single-family homes sold.

For the three months ending in December, the median selling price rose 5 percent, from an upwardly revised median price of $487,500 in the 2013 fourth quarter to $512,000 during the same three-month period this year. Similarly, the median selling price for detached homes also appreciated 5 percent for the full calendar year, climbing from an annual median price of $499,900 in 2013 to $525,000 this past year.

Last months median home price of $519,000 is the highest ever recorded during the month of December in Greater Boston, reflecting todays tight inventory levels and improved optimism about the economy and housing market. Notably, while down one-half of one percent last month, December marks the twenty-second consecutive month in which the ratio of original list price to sales price received by sellers has stood at or above 95 percent.

On a month-to-month basis, the supply level fell even more sharply, with the number listings tumbling nearly 30 percent from an upwardly revised 2,425 homes on the market at the end of November. This is due in large part to the fact the number of new listings coming on the market decreased more than 30 percent in December from the prior month to its lowest level since December 2013 when fewer than 400 homes came on the market.

Notably, condominium sales also improved on a month-to-month in December, climbing steadily by 25.3 percent from an upwardly revised 605 condos sold in November. Demand for condos remains especially strong among entry-level buyers and suburban empty-nesters looking to downsize or relocate to Boston, and, indeed, sales activity would likely be higher if not for the very limited supply of condos available for sale in eastern Massachusetts.

Over the final three months of the year, the median selling price rose a more modest 2.9 percent, increasing from a downwardly revised median price of $416,750 in the final quarter last year to $429,000 during the fourth quarter of 2014. Meanwhile, for the full calendar year, the median selling price for condominiums appreciated 6.2 percent, from an annual median price of $405,000 in 2013 to $430,000 this past year.

On a month-to-month basis, the median selling price also rose by 1.1 percent from a downwardly revised $435,000 in November. Since the monthly median price bottomed out at $270,000 in January 2009 during the last market correction, the median condo selling price has now risen 63 percent to its current figure of $440,000.

Like the single-family home market, the condominium market continues to be plagued by a lack of listings to meet current buyer demand, especially at the entry-level end of the market. As a result, sellers are profiting. In fact, the percentage of original list price to selling price reached or exceeded 98 percent for an eleventh consecutive month in December, meaning the typical condo owner was able to sell their unit either at or just below the full original asking price.

At the current sales pace there is just a 1.2 month supply of condos available for sale, which continues a steady decline from year ago levels when there was a 1.7 month supply in December 2013, and is down sharply from one month earlier when there was a 2.3 month supply in November 2014. As a result, its clear that the on-going shortage of listings continues to put upward pressure on prices and is preventing an even healthier rebound in sales activity from occurring, especially in suburban communities where few new units are being built. 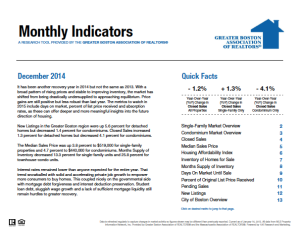