February condo sales closed down by almost two percent compared to the year before. Median prices continued to go up as supply continues to be down. Sellers were waiting out Mother Nature to add their homes to the market keeping new listings down in February.

The median selling price did decline modestly on a month-to-month basis by 2 percent from a median of $448,500 in January. However, last months median home price of $439,500 is the still the highest ever recorded during the month of February in Greater Boston, reflecting todays tight inventory levels and improved optimism about the economy and housing market. Notably, February marks the twenty-fourth consecutive month in which the ratio of original list price to sales price received by sellers has stood at or above 95 percent.

With less than 2,000 listings on the market as of February 28, the supply of homes for sale is at its lowest level in over a dozen years. Exacerbating the situatio is the fact that the number of new listings coming on the market fell 38 percent in February compared to the same month last year,and by 22 percent from one month ealier (January 2015).

This data offers clears evidence that there is not a sufficient amount of inventory to keep up with buyer demand, as permitting for new homes remains low and current homeowners remain reluctant to list their home for sale either because they owe more on their mortgage then their home is worth or they are fearful of not being able to find another home to purchase due to the lack of homes for sale.

Of little surprise, condominium sales also fell on a month-to-month in January, declining 7.3 percent from an upwardly revised 477 condos sold in January. In spite of this traditional seasonal slowdown, demand for condos remains strong, especially among entry-level buyers look to convert from renting to home ownership, overseas investors, and suburban empty-nesters looking to downsize or relocate to Boston. Indeed, sales activity would likely be higher if not for the very limited supply of condos available for sale in eastern Massachusetts.

Like the single-family home market, the condominium market continues to be plagued by a lack of listings to meet current buyer demand, especially at the entry-level end of the market. As a result, sellers are profiting. In fact, the percentage of original list price to selling price reached or exceeded 98 percent for an thirteenth consecutive month in February, meaning the typical condo owner was able to sell their unit either at or just below the full original asking price.

At the current sales pace there is a 2.4 month supply of condos available for sale, which continues a steady decline from year ago levels when there was a 3.5 month supply in February 2014. As a result, its clear that the on-going shortage of listings continues to put upward pressure on prices and is preventing an even healthier rebound in sales activity from occurring, especially in suburban communities where few new units are being built. 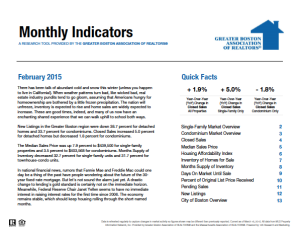