The sharp increase in home sales during June can be attributed in part to todays strong local economy, record low mortgage rates, and recent growth in new household formation. In addition, the severe weather of this past winter delayed the start of the traditional spring market, resulting in a higher than normal volume of closings during the past month.

Notably, on a month-to-month basis, home sales rose a remarkable 71 percent from an upwardly revised 1,082 home sales in May. However, for the entire second quarter, sales were down modestly from year ago levels, declining 0.8 percent, from 3,751 homes sold during the three months from April June 2014 to 3,720 in the spring quarter this year.

Notably, on a month-to-month basis, the median selling price of single family homes improved even more sharply, increasing 9.7 percent from a median price of $480,000 in May, as the number of homes valued at $1 million or more jumped 87 percent over the prior month, from 163 in May to 305 in June.

The steady uptick in median selling prices reflects todays tight inventory levels, improved optimism about the economy and housing market, and pent-up demand from millennials looking to transition from renters to homeowners, as well as empty-nesters looking to downsize and cash in on strong gains in their homes value in recent years. These conditions are benefitting sellers, as the ratio of original list price to sales price increased steadily over the previous month and year ago levels to 99.3 percent in June, its highest level this century and the twenty-eighth consecutive month in which the ratio of original list price to sales price received by sellers has stood at or above 95 percent.

Meanwhile, on a month-to-month basis, the supply level was essentially flat, declining 1.4 percent from an upwardly revised 3,675 single-family properties in May. In addition, the number of new listings coming onto the market fell 8 percent, or more than 200 units, from the previous month, but did increase nearly 19 percent (or roughly 375 units) from June 2014. Unfortunately, this modest gain will do little to improve market conditions given the current buyer demand, especially since permitting for new homes remains well below historic norms and many homeowners remain reluctant to list their home for sale either because they owe more on their mortgage then their home is worth or they are fearful of not being able to find another home to purchase due to the lack of homes for sale.

On a month-to-month basis, condo sales jumped, increasing 43.8 percent from an upwardly revised 943 condos sold in May, but for the second quarter sales did slip 5.1 percent, from 3,135 in the three months from April June 2014 to 2,975 in the spring quarter this year. Nonetheless, demand for condos remains strong, especially among entry-level buyers looking to convert from renting to home ownership, overseas investors, and suburban empty-nesters looking to downsize or relocate to Boston. Indeed, sales activity would likely be higher if not for the very limited supply of condos available for sale in eastern Massachusetts.

On a quarterly basis, the median selling price appreciated a steady 7.4 percent, increasing from $420,000 in the second quarter last year to a median price of $451,000 in the three months from April June 2015. Since the monthly median price bottomed out at $259,500 in January 2009 during the last market correction, the median condo selling price has climbed 77 percent.

Like the single-family home market, the condominium market continues to be plagued by a lack of listings to meet current buyer demand, especially at the entry-level end of the market. As a result, sellers are profiting. In fact, the percentage of original list price to selling price climbed to a new record high of 101.6 percent in June, making it the third consecutive month the ratio of list price to sale price has stood at or above 100 percent meaning the typical condo owner was able to sell their unit either at or above the full original asking price. 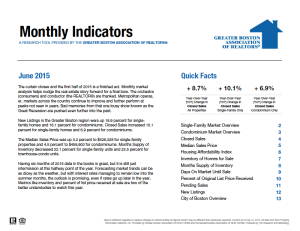