Strong buyer activity in spring pushed closed sales up in July. Supply and demand are pushing home prices up. New listings added to the market are helping increase closed sales.

The strong sales pace in July can be attributed to steady job growth and the overall health of the local economy, near record low mortgage rates, and recent improvement in household formation. This years severe winter weather also delayed the start of the traditional spring market, resulting in a higher than normal closing activity during the past month.

The steady rise in median selling prices reflects todays tight inventory levels, improved optimism about the economy and housing market, and pent-up demand from millennials looking to transition from renters to homeowners, as well as empty-nesters looking to downsize and cash in on strong gains in their homes value in recent years. These conditions are benefitting sellers, as the ratio of original list price to sales price increased steadily over year ago levels to 99.1 percent in July, a figure that is just one-tenth of one percent below the record 99.2 percent listing-to-sales price ratio observed one month earlier in June 2015.

Meanwhile, the number of nw listings coming onto the market in July fell 27 percent, or 650 units, from the previous month, but did improve 14 percent in July from the same month one year ago. Unfortunately, this modest gain will do little to improve market conditions given the current buyer demand, especially since permitting for new homes remains well below historic norms and many homeowners remain reluctant to list their home for sale either because they owe more on their mortgage then their home is worth or they are fearful of not being able to find another home to purchase due to the lack of homes for sale.

Like the single-family home market, the condominium market continues to be plagued by a lack of listings to meet current buyer demand, especially at the entry-level end of the market. As a result, sellers are profiting. In fact, July marks the fourth consecutive month the ratio of list price to sale price has stood at or above 100 percent meaning the typical condo owner was able to sell their unit either at or above the full original asking price. 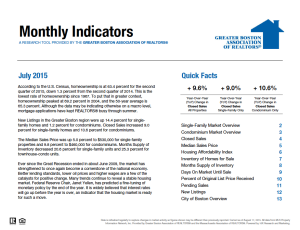