September closed home sales up on strong buyer activity over the summer. Home prices continued to be pushed higher by strong demand and low supply in September. Six straight months of new listings added to the market are giving buyers more options.

Conversely, on a month-to-month basis, single-family home sales slid for a second consecutive month, falling 29 percent from an upwardly revised 1,729 homes sold in August. The decline was not unexpected however, given the fact August sales volume reached a record high for the month, and housing demand typically softens from late summer through winter due to the seasonal nature of the housing market in New England.

The healthy sales pace over recent months can be attributed to todays healthy local labor market, low mortgage rates, and recent gains in household formation. This years severe winter weather also delayed the start of the traditional spring market, resulting in a higher than normal closing activity throughout the entire summer season.

However, on a month-to-month basis the median selling price decreased, declining 8.5 percent from a downwardly revised median of $497,100 in August, due in large measure to a sharp decline in sales of high-end homes of $800,000 or more which fell by nearly one-third (30%) between August and September.

However, the supply-demand imbalance is getting better. For example, at the end of the first quarter of this year the number of listings on the market was down 27 percent in March from the same month last year. Meanwhile, on a month-to-month basis the supply level improved a modest 3.6 percent from an upwardly revised 3,736 single-family properties in August.

Additionally, the number of new listings coming onto the market increased nearly 11 percent on annual basis to 2,040 in September, and rose a much more substantial 41 percent (or by nearly 600 homes) from August. This is all good news for home buyers who will benefit from increased home ownership opportunities as a result of the larger selection of home available for sale.

Similar to the single-family home market, condominium sales declined nearly 26 percent on a month-to-month, from an upwardly revised 1,211 units sold in August.

Like the single-family home market, the median selling price for condominiums also declined on a month-to-month basis in September as sales activity in the luxury market softened. The median price for condos last month was down 6.8 percent from the all-time record high median price of $460,000 set consecutively during both July and August, as condo units priced at $1 million or more fell by more than one-third (38%) from 97 units sold in August to 60 in September 2015. Nonetheless, since the monthly median price bottomed out at $259,500 in January 2009 during the last market correction, the median condo selling price has risen 65 percent.

Like the single-family home market, the condominium market continues to be plagued by a lack of listings to meet current buyer demand, especially at the entry-level end of the market. As a result, sellers are profiting. In fact, September marks the sixth consecutive month the ratio of list price to sale price has stood at or above 99 percent meaning the typical condo owner was able to sell their unit for nearly full asking price or above the original list price.

However, similar to the single-family home market, the condo market also has seen marked improvement in the supply-demand imbalance in the near term. For example, at the end of the first quarter of this year the number of listings on the market was down 30 percent in March from the same month last year. Furthermore, on a month-to-month basis listing inventory rose a healthy 11 percent from an upwardly revised 1,648 condo units for sale in August.

Additionally, the number of new listings coming onto the market increased 11 percent on annual basis to 1,421 in September, and rose a much more substantial 56 percent (or over 500 condo units) from August. This is welcomed news for buyers who have been frustrated by a shortage listings and fierce competition for condo units in the local market for years.

At the current sales pace there is a 2 month supply of condos available for sale, which is down from a 2.3 month supply in September 2014, but up from 1.4 months of supply in August. As a result, the on-going shortage of listings continues to put upward pressure on prices and is preventing an even healthier rebound in sales activity from occurring, especially in suburban communities where few new units are being built. 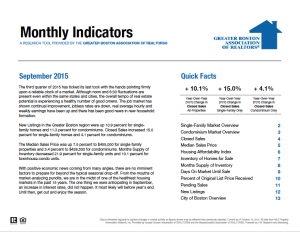