On a month-to-month basis, single-family home sales fell for a third consecutive month, sliding a modest 4.6 percent from an upwardly revised 1,241 homes sold in September. Although the 1,184 homes sold during October is the fewest for any month since May, this decline is not unexpected since housing demand typically softens from the summer months through winter due to the seasonal nature of the housing market in New England. The healthy sales pace of recent months can be attributed to todays healthy local labor market, low mortgage rates, and recent gains in household formation.

On a month-to-month basis the median selling price decreased in October, declining 3.3 percent from a median of $455,000 in September, due in part to a steady decline in sales of high-end homes of $800,000 or more which fell by approximately one-fifth (19%) between September and October.

The current median selling price reflects todays low inventory levels, improved optimism about the economy and housing market, and pent-up demand from millennials looking to transition from renters to homeowners. These conditions favor sellers, as evidenced in the ratio of original list price to sales price which has now reached or exceeded 95 percent for 32 consecutive months.

While demand is still healthy, a scarcity of listings is putting upward pressure on prices and reducing affordability in the condo market and that is affecting entry-level buyers in particular. In fact, in October the monthly median selling price for condominiums eclipsed the median selling price for single-family homes for just the fourth time ever, so with a larger number of properties to choose from more first-time buyers are looking to the detached single-family home market to buy.

The median selling price for condominiums also increased on a month-to-month basis in October, climbing steadily by 6.2 percent from a median of $428,500 in September. Since the monthly median price bottomed out at $259,500 in January 2009 during the last market correction, the median condo selling price has risen 75 percent.

Notably, the condominium market continues to be plagued by a lack of listings to meet current buyer demand, especially at the entry-level end of the market. As a result, sellers are profiting. In fact, October marks the seventh consecutive month the ratio of list price to sale price has stood at or above 99 percent meaning the typical condo owner was able to sell their unit for nearly full asking price or above the original list price.

Notably, however, the condo market has seen marked improvement in the supply-demand imbalance in the near term. For example, six months ago in April the number of listings on the market was down by more than one quarter (26.6%) from the same month last year. In addition, the number new listings coming on to the market improved 5 percent last month from the previous October, but is down 20 percent from September. As a result, demand still far exceeds the supply of condos for sale.

At the current sales pace there is a 2.2 month supply of condos available for purchase, which is down ever so slightly from a 2.3 month supply last October, and stable from September. Thus, the on-going shortage of listings continues to put upward pressure on prices and is preventing an even more robust market from occurring. 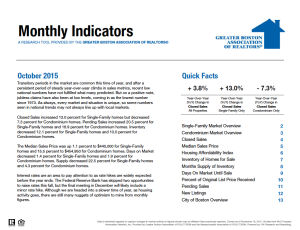