On a month-to-month basis, single-family home sales fell for a fourth consecutive month, declining 16.9 percent from an upwardly revised 1,241 homes sold in September. Although the 1,184 homes sold during October is the fewest for any month since May, this decline is not unexpected since housing demand typically softens from the summer months through winter due to the seasonal nature of the housing market in New England.

In a bit of an aberration, the median selling price also improved on a month-to-month basis in November, increasing 8.4 percent from a median of $440,000 in October as a steady gains in the inventory of homes for sale this fall has led to increased activity in the trade-up market.

The current median selling price reflects todays low mortgage rate environment which allows home buyers to purchase more home, improved optimism about the economy and housing market, and the broad appeal of home ownership in a marketplace where rents have been rising sharply for several years. Not surprisingly, sellers are benefitting, as evidenced by the ratio of original list price to sales price which rose more than one-half of one percent over the past 12 months to 96.9 percent, and has now reached or exceeded 95 percent for 33 consecutive months.

However, the number of new listings placed on the market in November increased 22 percent on an annual basis.

Finally, inventory as expressed in months of supply also fell on both an annual and month-to-month basis last month, declining to 3.0 months of supply from 3.7 months of supply in November 2014 and 3.3 months in October 2015. In a balanced market 78 months of supply exists, so at the current sales pace there remains an insufficient supply of homes available to meet buyer demand.

Meanwhile, condominium sales slowed on a month-to-month basis for a fifth consecutive month (which is not unusual for this time of year), falling 6.9 percent from an upwardly revised 811 units sold in October.

While demand is still healthy, a scarcity of listings is putting upward pressure on prices and reducing affordability in the condo market and that is affecting entry-level buyers in particular. In fact, in October the monthly median selling price for condominiums eclipsed the median selling price for single-family homes for just the fourth time ever, so with a larger number of properties to choose from more first-time buyers are looking to the detached single-family home market to buy.

On a month-to-month basis, the median selling price for condominiums slipped a modest 1 percent, from $455,000 in October. Since the monthly median price bottomed out at $259,500 in January 2009 during the last market correction, the median condo selling price has risen 73 percent.

Notably, the condominium market continues to be plagued by a lack of listings to meet current buyer demand, especially at the entry-level end of the market. As a result, sellers are profiting. In fact, October marks the eighth consecutive month the ratio of list price to sale price has stood at or above 99 percent meaning the typical condo owner was able to sell their unit for nearly full asking price or above the original list price.

Notably, however, the condo market has seen marked improvement in the supply-demand imbalance in the near term. For example, nine months ago in February the number of listings on the market was down by one-third (32.9%) from the same month last year. In addition, the number new listings coming on to the market improved by nearly one-quarter (23.6%) last month from the previous November.

Unfortunately, demand still exceeds the supply of condos for sale. At the current sales pace there is a 2.1 month supply of condos available for purchase, which is down from a 2.5 month supply last November and 2.4 month supply in October. Thus, the on-going shortage of listings continues to put upward pressure on prices, albeit more modestly so, and is preventing an even more robust market from occurring. 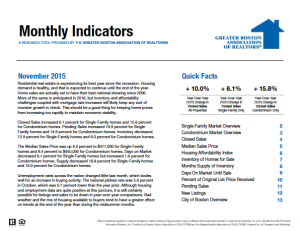