2015 ends with most closed sales in a December since 2004. Strong buyer activity, low inventory and low interest rates pushed prices up again on homes in. December. 2015 was a year of higher sales, very low inventory and prices back to pre-recession levels.

On a month-to-month basis, single-family home sales also rose sharply, increasing an impressive 25.4 percent from an upwardly revised 1,030 homes sold in November. Notably, Decembers sales total is the best in four months, and marks the first time in five months that sales have risen on a month-to-month basis. The last time sales volume was greater was this past August when 1,930 single-family homes sold.

The healthy sales pace of recent months can be attributed to todays healthy local labor market, low mortgage rates, and recent gains in household formation, which led to a 12.7 percent jump in sales during the final quarter of year from 3,141 homes sold in the fourth quarter of 2014 to 3,539 homes sold over the final three months this year. Single- family home sales also were up for the year, though more modestly so, with the 14,313 homes sold in 2015, reflecting an annual increase of 7.7 percent from the 13,294 homes sold in 2014.

On a month-to-month basis, the median selling price did slip modestly, decreasing 2.6 percent from a median of $477,250 in November, as some sellers demonstrated an increased willingness to negotiate on price in order to close on the sale of their property prior to years end.

For the three months ending in December, the median selling price rose 3.4 percent, from a revised median price of $440,000 in the 2014 fourth quarter to $455,000 during the same three-month period this year. Meanwhile, for the year, the median selling price for detached homes appreciated a healthy 9.8 percent, climbing from an annual median price of $410,000 in 2014 to $450,000 this past year.

The steady gain in the median selling price over the past year reflects todays low mortgage rate environment which allows home buyers to purchase more home, improved optimism about the economy and housing market, and the broad appeal of home ownership in a marketplace where rents have risen sharply for several years. Not surprisingly, sellers are benefitting, as evidenced by the ratio of original list price to sales price which rose more than one-half of one percent over the past 12 months to 96 percent, and has now reached or exceeded 95 percent for 34 consecutive months.

The median price has increased a healthy 50 percent from March 2009 when home values bottomed out at $309,950.

The healthy sales pace over recent months can be attributed to the strong local jobs market, low mortgage rates, and recent gains in household formation.

On a month-to-month basis, the median selling price for condominiums slipped a modest 1.1 percent, from $450,000 in November. Since the monthly median price bottomed out at $259,500 in January 2009 during the last market correction, the median condo selling price has risen 71.5 percent.

Notably, the condominium market continues to be plagued by a lack of listings to meet current buyer demand, especially at the entry-level end of the market. As a result, sellers are profiting, with the ratio of list price to sale price having risen over one-half of one percent during the past 12 months to 98.4 percent meaning the typical condo owner was able to sell their unit for nearly full asking price or above the original list price.

Notably, however, the condo market has seen marked improvement in the supply-demand imbalance in the near term. For example, nine months ago in March the number of listings on the market was down by nearly one-third (30.3%) from the same month last year. In addition, the number new listings coming on to the market improved by 17 percent last month from the previous December.

Unfortunately, demand still exceeds the supply of condos for sale. At the current sales pace there is a 1.4 month supply of condos available for purchase, which is down from a 1.6 month supply last December and 2.3 month supply in November. Thus, the on-going shortage of listings continues to put upward pressure on prices, albeit more modestly so, and is preventing an even more robust market from occurring. 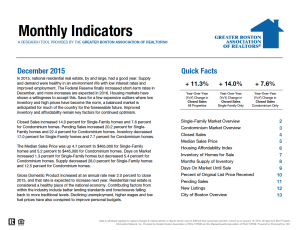