BOSTON, July 6, 2016 /PRNewswire-USNewswire/ -- On June 14, the Greater Boston Association of REALTORS (GBAR) named Joseph Schutt, a Broker with Unit Realty Group in Boston, as the 2016 Greater Boston REALTOR of the Year during the association's Annual Awards Breakfast at the Wellesley Country Club in Wellesley. 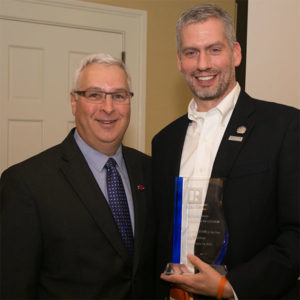 Robert Harrington presenting Joe Schutt with the Greater Boston Association of Realtors' Realtor of the Year 2016 award on June 14 at the associations annual awards and networking breakfast.

The REALTOR of the Year Award was first presented locally in 1957, and it honors members for their volunteerism and industry work over the prior 18 months in three specific areas: participation and service to the REALTOR organization on the local, state and national levels; community involvement, including volunteerism in community service projects and membership and support of civic and charitable organizations; and outstanding business and real estate industry accomplishments.

Schutt has been actively involved with the REALTOR organization since 2003. He is currently serving on the GBAR Board of Directors and is the chairman of GBAR's Roadshow Task Force, as well as on the Professional Standards Committee. He is also an active member of the GBAR Young Professionals Network, and served on the committee last year.

On the state level, Schutt serves on the Massachusetts Association of REALTORS (MAR) Professional Standards Committee and Government Affairs Committee this year. A member of the MAR Board of Directors this year, Schutt is also a graduate of the MAR Leadership Academy and served as an REALTORS Political Action Committee (RPAC)Trustee in 2015.

Schutt is also active on the National Association of REALTORS (NAR) RPAC Participation Council and has previously served as an NAR Director and on its Diversity Committee. Active as an Ambassador for Inman Connect the past two years, Schutt has also served as President and as a Director for the Northeast Chapter of Certified Residential Specialist (CRS).

Schutt's civic activities include his longtime involvement in the Neighborhood Association of Back Bay as well as the Beacon Hill Civic Association. He is also involved with the Animal Rescue League of Boston and HomeStart, which aims to provide housing for homeless families.

The Greater Boston Association of REALTORS is a private trade association with more than 8,500 REALTOR members who specialize in residential real estate in Eastern Massachusetts. GBAR is the largest of five divisions of the Greater Boston Real Estate Board (GBREB), and a local chapter of the Massachusetts and National Associations of REALTORS (NAR). REALTOR is a federally-registered trademark reserved exclusively for members of NAR.